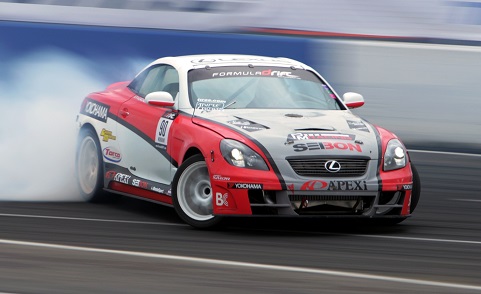 FULLERTON, CA (March 5, 2013) – Yokohama Tire Corporation (YTC) announced today it will participate as a Formula Drift tire supplier for the second consecutive year and will partner with three teams for the 2013 season. Matt Johnson, YTC performance marketing supervisor, said drivers will run on ADVAN Neova® AD08 and S.drive® tires during the seven-event series, which starts April 12-13 at the Long Beach Grand Prix.

Two new teams will join the Yokohama family in 2013 – the GSR Autosport BMW E46 piloted by Michael Essa, and the GTNET Tomei Powered Subaru BRZ driven by Toshiki Yoshioka. The Apex-I Lexus SC430 returns from 2012 with Pat Mordaunt behind the wheel.

“Yoshioka is a veteran drift competitor who started with Yokohama in the D1 Grand Prix in Japan during 2003 and is back with Yokohama to contend for podiums once again,” said Johnson. “He is a past Formula D winner, and will compete in the Pikes Peak International Hill Climb for the third consecutive year.”

Nick Richards, president of GSR Autosport, said, “we have a long history with Yokohama tires that comes from years of running a broad array of road-racing programs. Yokohama has a well-earned reputation of winning at the highest levels of motorsport, and as the level of competition continues to rise in drifting, partnering with the best is critical to fielding a winning team.”

“We have a variety of marketing programs,” said Fred Koplin, YTC director of marketing communications, “from sports sponsorships to television, but Formula Drift gives us exposure to a passionate audience of young enthusiasts that may not see a lot of other marketing initiatives.”

Yokohama is a strong supporter of the tire care and safety guidelines established by the Rubber Manufacturers Association and the National Highway Transportation and Safety Administration. Details can be found at the “Tire Care & Safety” section at www.yokohamatire.com.